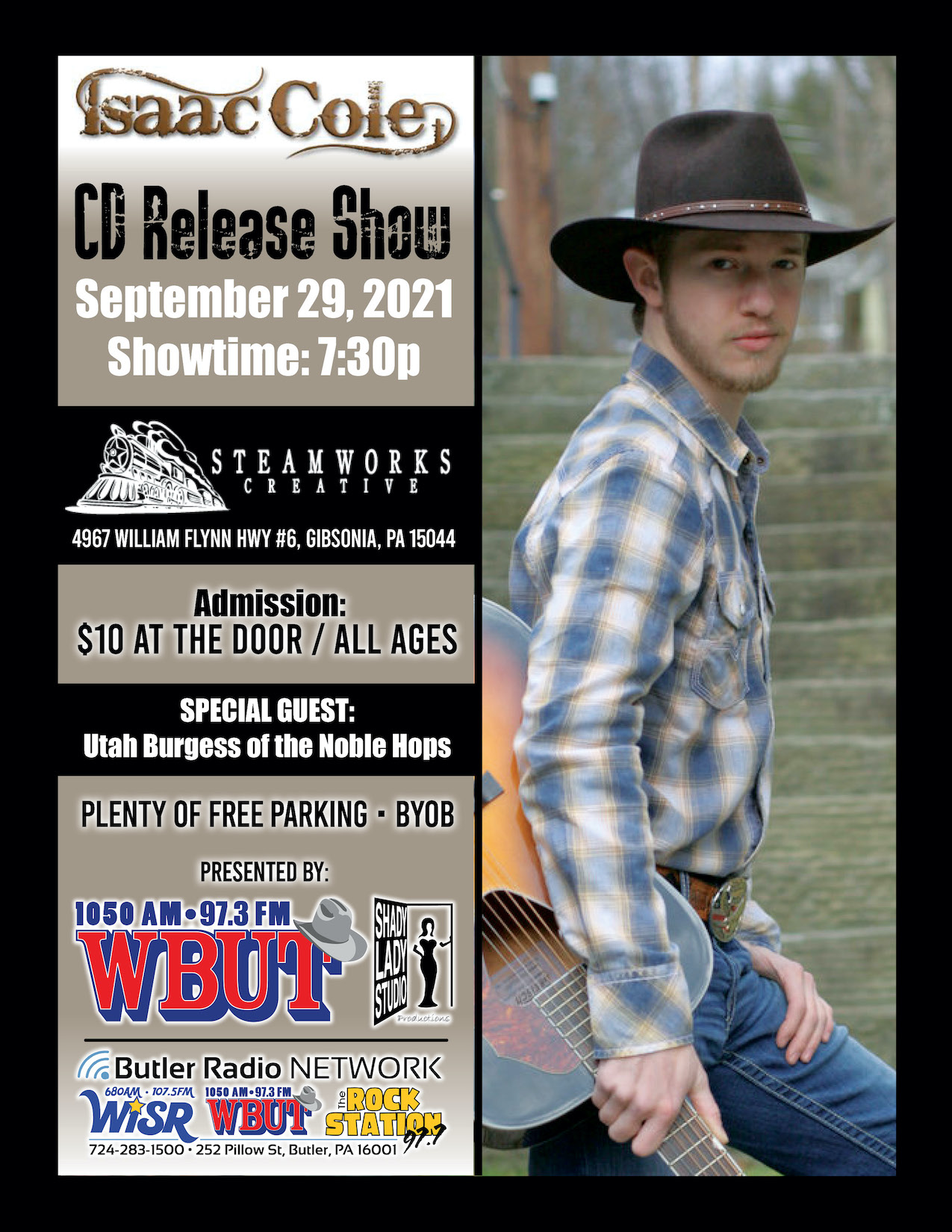 Isaac Cole turned twenty-one years old in April of 2021, and returned to Nashville after working at Dollywood Theme Park in Pigeon Forge, TN where he was a full-time utility musician in The Back Porch Band.  That means he played whatever instrument they needed him to play.  Most often he played acoustic guitar, some electric guitar, banjo, harmonica, and occasionally the fiddle.  Isaac was even given the honor of playing guitar for Dolly Parton herself in April 2019 for a media event.  Shortly after Isaac graduated from home-school in June of 2018, he moved to Nashville, TN to pursue his music career by songwriting and networking in the Country Music Capital!  Isaac traveled from his western Pennsylvania home to audition for Dollywood in January of 2018 while he was still finishing high school.  Between Christmas and New Years of 2018 Isaac received a job offer from Dollywood for the 2019 season, so after about six months in Nashville, he made the move to Pigeon Forge.  The CoVid shut downs caused him to lose his job, and now he’s back to follow his dreams!

Isaac recorded a new CD project as soon as he returned to Nashville, and it will be released at the end of summer 2021.  During his first stay in Nashville, Isaac wrote “Too Nice” with Devon O’Day, recorded it with Jeff Bates producing, and released it as a single in March of 2019.  He traveled across the country to promote the single to country radio stations, and was able to appear on the Music Row Breakout Chart for the first time in his career, thanks to the help of his manager/promoter Sarah Reed.  During the same year, Isaac also wrote quite a few Christmas songs, with some of his favorite co-writers, Corey Lee Barker, and Randy Finchum among others.  He recorded his first “all original” six song Christmas EP “Cole for Your Stocking” with Kimo Forrest producing, and released it in October of 2019.  The single “Christmas Shoppin’ Again” was released to Country radio for the Christmas season.  As soon as his new single is ready, he’ll be heading out to promote it on another radio tour in fall of 2021.

In his 21 years, Isaac has recorded five CD’s (“Country Boy” 2011, “Just a Kid” 2013, “I’m Your Huckleberry” 2016, “Cole for Your Stocking” 2019, and “The Fifth” 2021) and two singles “Everyday Livin’”, and “Too Nice”.  Isaac is also a proud member of the legendary Wheeling Jamboree.  He was inducted in 2016 as the second youngest solo artist ever to be inducted, behind Brad Paisley!   His largest stage was appearing on the January 2016 season XV of American Idol on FOX, where he made it all the way through Hollywood week, and ended up in the top 51 after the Showcase Round. We’re excited to see what’s next…