Joe Newtz and Hats Off 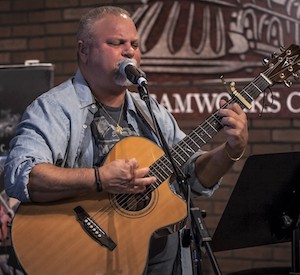 Western Pennsylvania singer-songwriter Joe Newtz has been writing songs for more than two decades and he seems to have a lot of diverse musical influences and manages to fuse them into a signature sound. This speaks well for his songwriting talent as you can hear influences ranging from Gregg Allman to Pearl Jam, from Chris Isaak to R.E.M.

The music trends towards rock and he shows an undeniable knack for catchy song hooks with melodies that frequently feature set-ups that build into payoff choruses that deliver. His inspired performances showcase a love for making music, which translates into well-crafted and very enjoyable music.

Making their debut appearance to the acoustic scene is Hats Off, a spin-off band of The S’Wearing Hats. What started as a couple of songs for a backyard BBQ in their neighborhood town of Cranberry Twp., turned into a 9-memberband. Tonight’s show will feature four of those members. Jeanine and Scott Swanson, Bill Bench, and Dave Straight will be singing an eclectic mix of 80s, 90s, and 2000s.