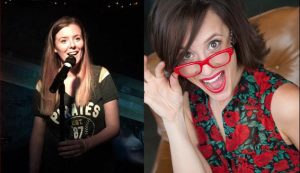 A Los Angeles native, Katie Barbaro is a writer-comic-actress based in New York City.  She is currently developing her pilot “Upline,” which won the 2017 iO Comedy Network pilot writing competition. Katie co-created, wrote, and performed on the web series OMG! For Pete’s Sake, which was an official selection at the DC Web Fest, Newark Film Festival, and won “Best Ensemble Cast” in the 2016 NYC Web Fest. This year, the web series was picked up by Seeka TV. As an improviser, Katie performs as a mainstage company member of ComedySportz NY and is in the Advanced Study program at UCB. Regularly performing standup around the city,

Helen Wildy is a stand up comedian based in Pittsburgh, PA. Originally from Belfast, Northern Ireland, Helen moved to the United States as a child and grew up in the North Hills of Pittsburgh. Helen performs regularly at Arcade Comedy Theater as part of Joystick – one of Arcade’s house teams. In addition to improv, Helen can be found doing stand up comedy all over Pittsburgh